Those cruisers who have already seen Rome and just can’t bear to take the 1.5-hour trip there and back from the port of Civitavecchia should absolutely consider a visit to the UNESCO World Heritage sites of Tarquinia and Cerveteri, two Etruscan cemeteries reflecting two very different burial practices. The Etruscans were the earliest urban civilization in the northern Mediterranean and what they left behind is astounding and definitely worth skipping yet another trip to Rome. On our recent Silver Muse cruise we opted for a private tour with Discovery Tours and came away with one of the most memorable days of the trip. I’m not sure why this tour is not regularly offered by cruise ships, but it has to be THE highlight of the area.

Our first stop was Tarquinia Necropolis, also know as Monterozzi, whose graves, the earliest of which date from the 7th century BC, offer the ancient world’s most beautiful and best-preserved painted tombs, comparable only to those of ancient Egypt. In fact, Tarquinia is referred to as “the first chapter in the history of great Italian painting”, and the large-scale frescoes in each of the tombs are magical. I’m quite enamored with these painted tombs, each of which is adorned with scenes of everyday life of huntsmen, fishermen, musicians, athletes, even funeral banquets, all exotically named such as Tomb of the Leopards, the Bulls, the Lionesses, the Warrior, the Hunter, Puffins, Shields, and more. Visiting each requires you to walk down a flight of stairs to the actual tomb. 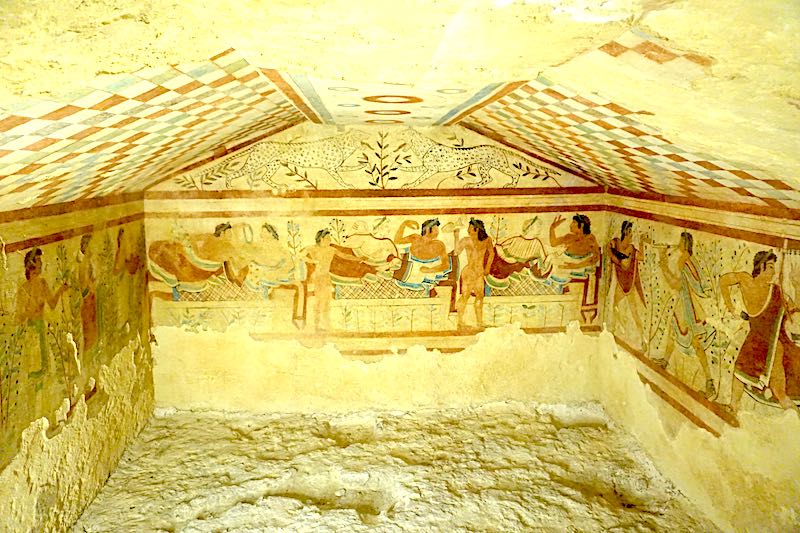 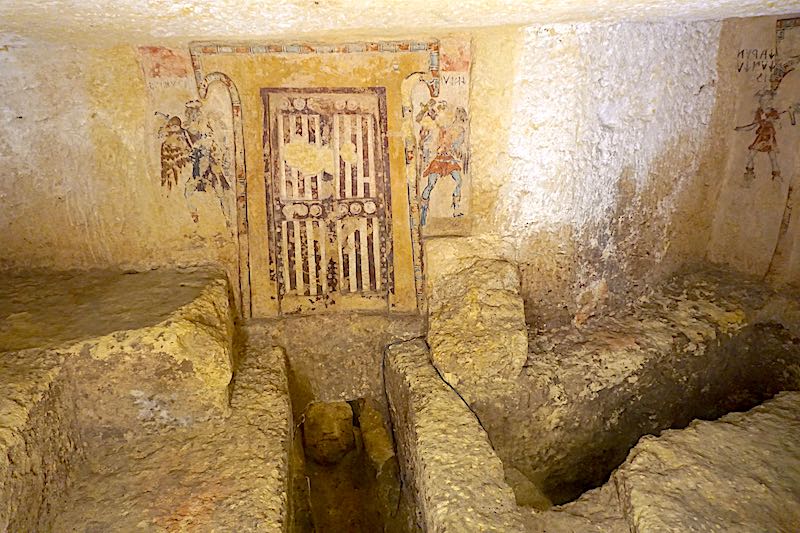 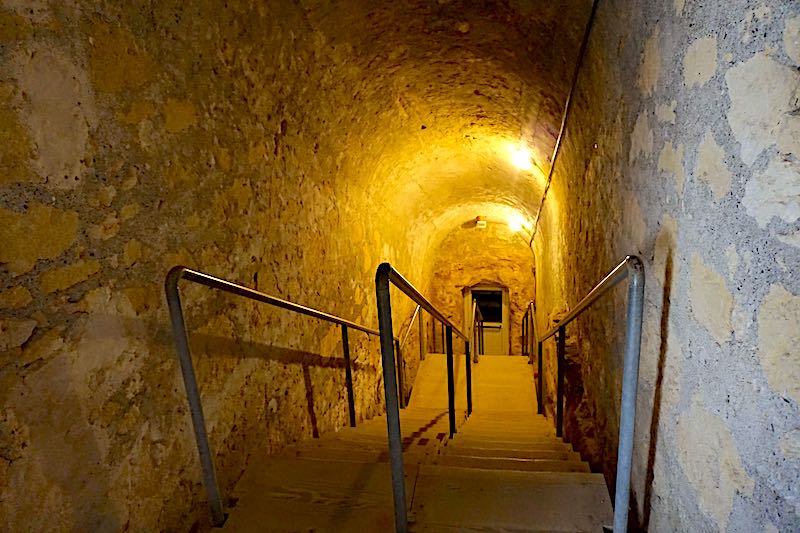 After your visit you should plan a stop at the nearby National Archaeological Museum in Tarquinia to view an unparalleled collection of Etruscan artifacts housed in the fifteenth-century Palazzo Vitelleschi. 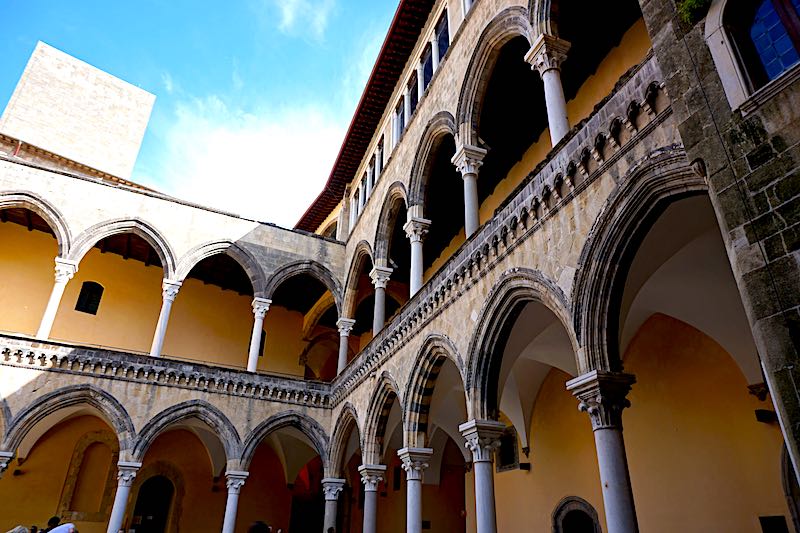 Learn about the Etruscans and their concept of what happened to the deceased beyond the grave. Take in the collection of Etruscan sarcophagi, Greek pottery, and the celebrated winged horses that used to adorn the pediment of the Altar of the Queen and has now become the symbol of the city of Tarquinia. 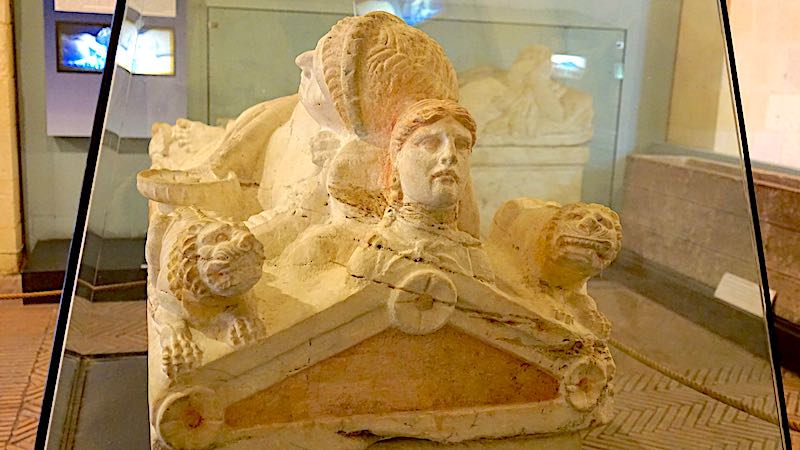 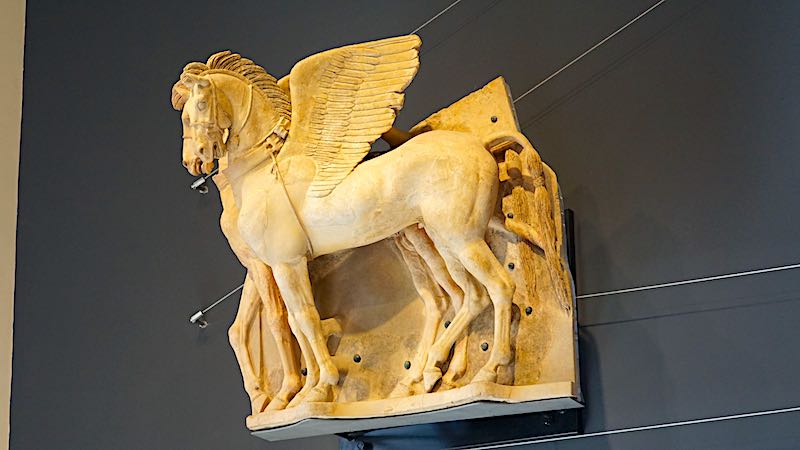 If you plan on visiting the Museum, you’ll save money by purchasing a combo ticket to see both the Necropolis and the Museum. Then find time to walk around the medieval city of Tarquinia set high on a hill with views overlooking the valley of the River Marta and the Tyrrhenian Sea from the old city walls. We were there during market day, well worth a stroll, and even found a gift shop with excellent replicas of Etruscan jewelry. 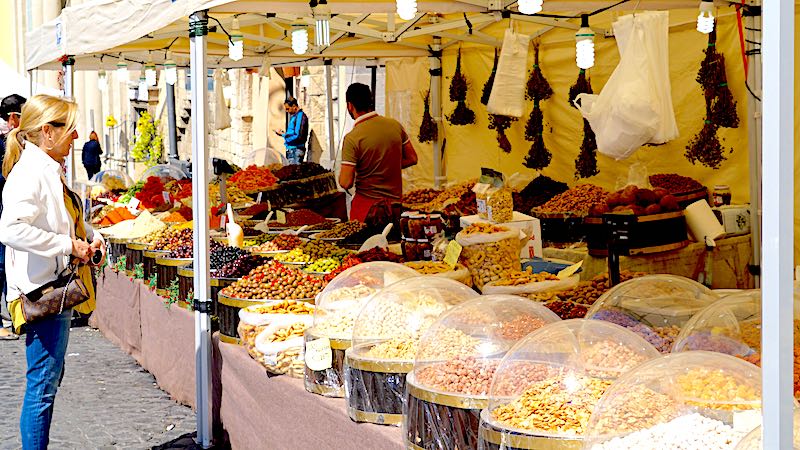 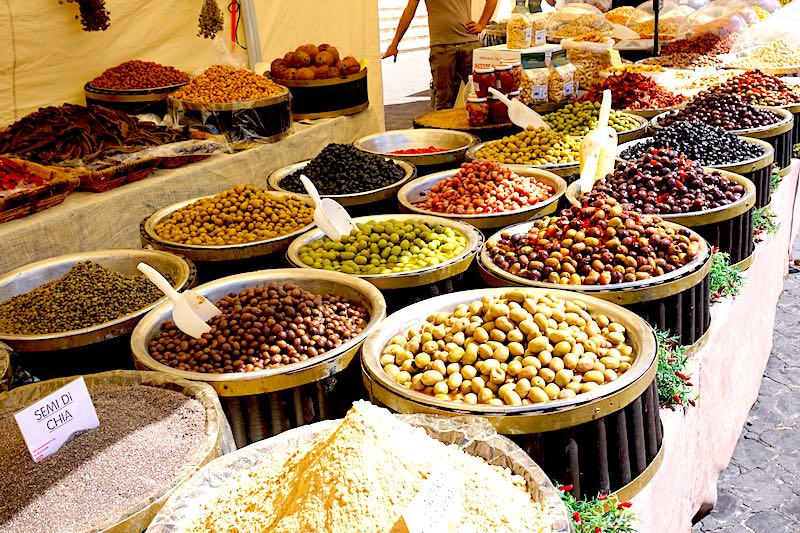 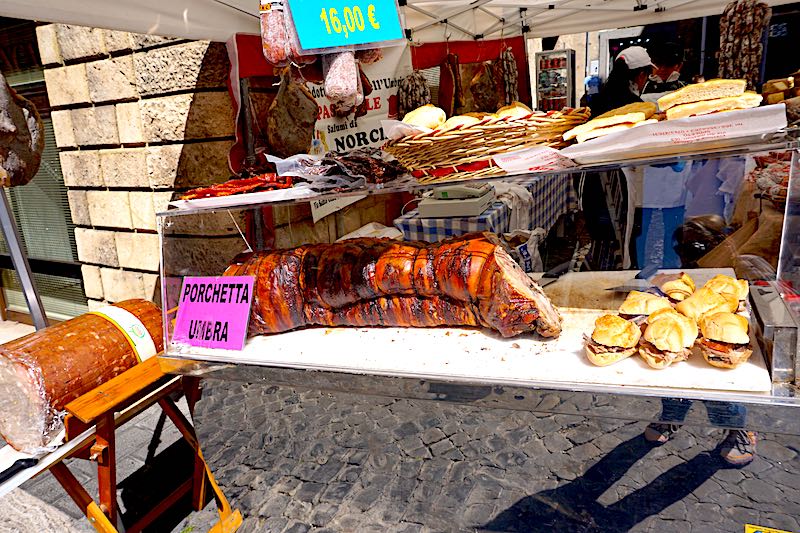 Then off to Cerveteri, known as Banditaccia, where thousands of graves were built by aristocratic families. Organized in a city-like plan with streets, squares, and neighborhoods, the tombs have a completely different look than in Tarquinia with these located inside tumuli cut into the tufa rock and partly built over it. Wander the peaceful streets of this “city of the dead” to view tombs imitating the houses where their occupants spent their lives, most with several rooms, arched doors and windows, some with columns, elaborate ceilings, and funerary beds. 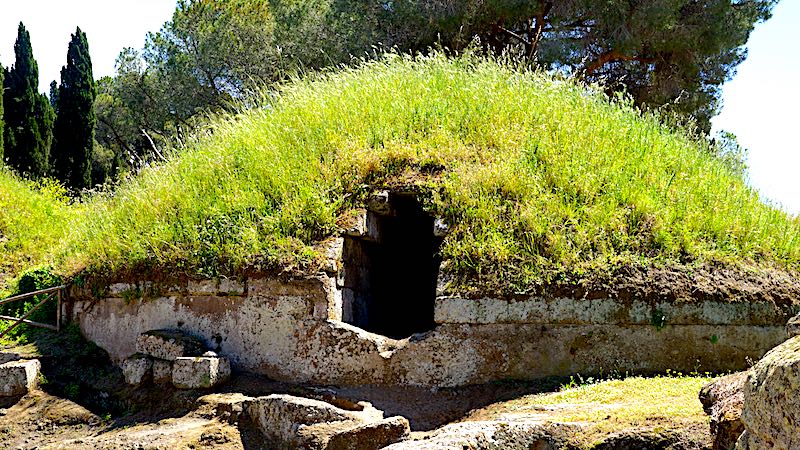 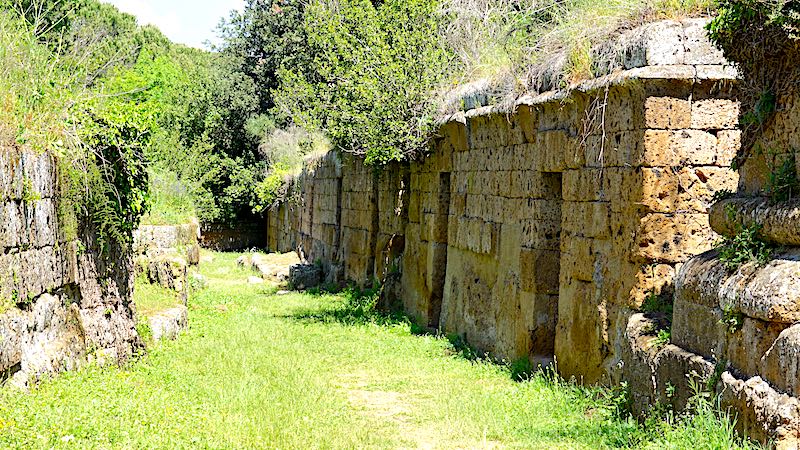 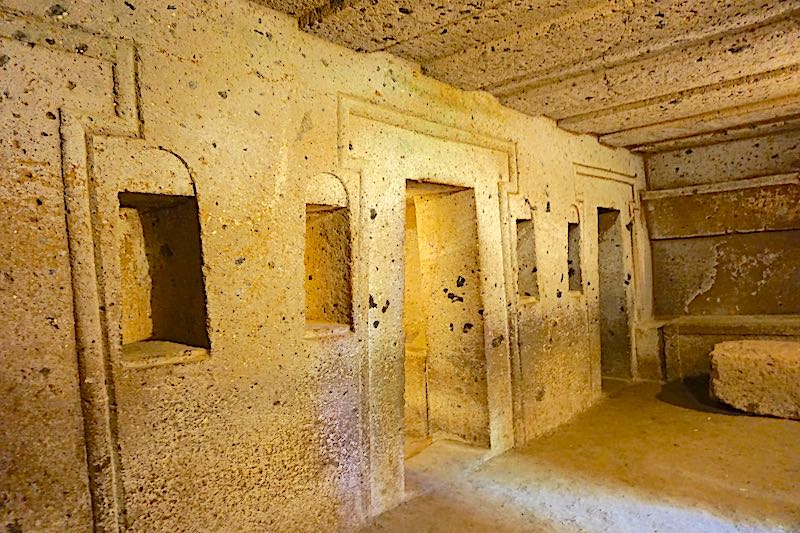 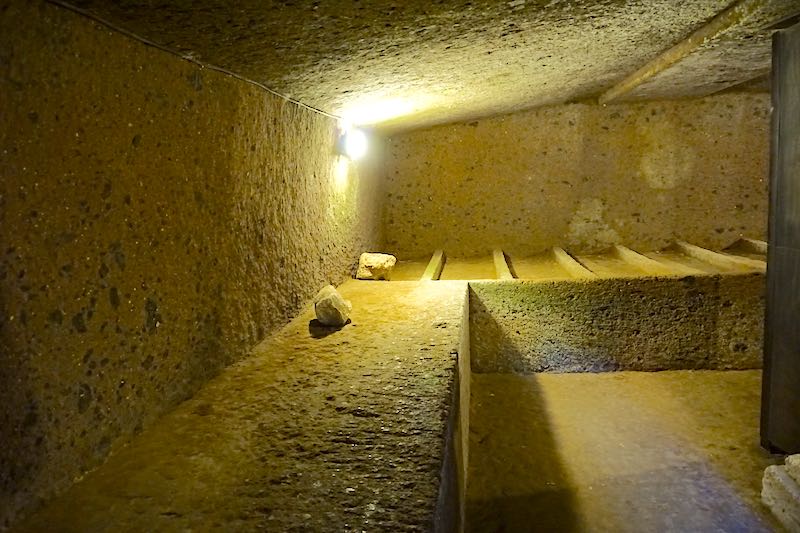 Since these tombs do not offer the vivid paintings of Tarquinia, be sure to inquire as to which 8 tombs offer multimedia installations that use audiovisual projections, virtual reconstructions, sound and light effects and 3D videos to show how the tombs would have looked more than two thousand years ago. And if you are seeing Cerveteri without a guide, download the “Cerveteri” app for IPhone for a map view of the necropolis with stops along the way offering audio descriptions at points of interest.

After a morning of tomb touring we were one hungry bunch so at a stop in one of the villages surrounding nearby Lake Bracciano, we stuffed ourselves with “little fishes”, fresh whole anchovies flash fried in a light batter. Delicious! 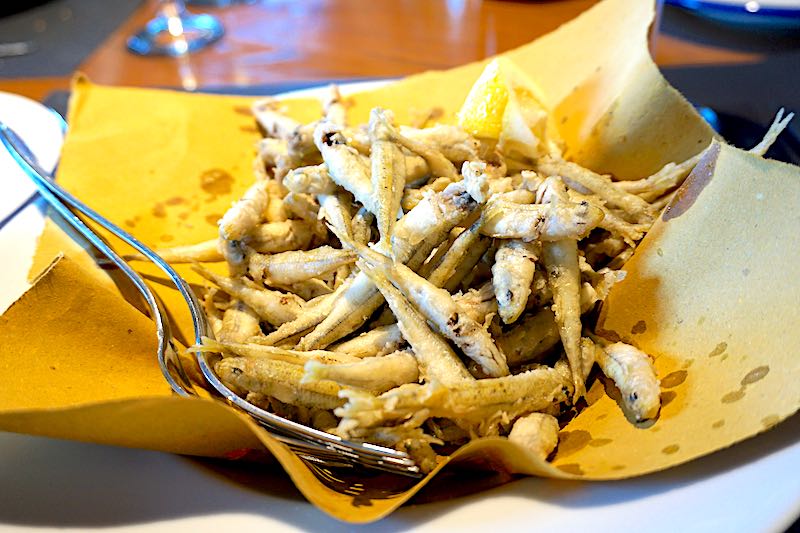 Let Us Help You in Planning an Extraordinary Luxury Vacation!
Our expert travel advisors at GSC World Travel will plan a fabulous vacation to the places I write about and more. Your luxury Travel Advisor will work with you to create the perfectly planned trip of a lifetime, making sure that nothing is left to chance.
Please submit a Consultation Request to begin.

We are looking for a day tour to Tarquinia & Cerveteri on Sept 28, 2018 from Civitavecchia Port when docked from 7AM to 7PM on Royal Caribbean’s Independence of the Seas. Do you provide this service? If so please send me an itinerary and cost.
Thanks so much.
Warm Regards,
Shelley

We will be in Civitavecchia port on August 27th on Royal Caribbean from 7:00AM to 7:00PM and are interested in a tour to Tarquinia and Cerveteri. Would you please send me the itinerary and price for your tour.
Thank you so much.
Vickie Meseck 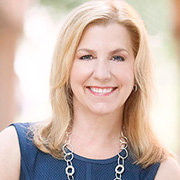 Luxury travel and lifestyle blogger on a relentless quest to see the world in style.

Subscribe to the FREE newsletter and you'll receive a wealth of useful information!